Yes, we are back. The 2017 Under 17s team has been selected and they have already had a few training sessions. 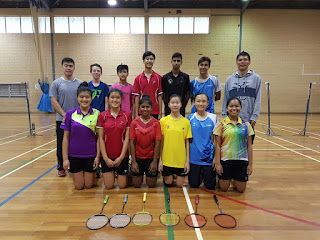 We have Coach Ryan Lin putting up his hand again to coach this young team. Ryan coached the 2nd WA team last year.

Of course the 1st team under Yuli Zheng went on to win a historic silver with KC Teoh winning  the triple crown.

Many of the players from last year's 2nd team have now formed the first team. It was good that they managed to get some experience last year.

Milain Ranasinghe. He was a men's doubles winner with KC last year. He should be one of the top players this year.

Romy  was also in the 2016 silver winning state team. He will have been training hard to see if he can excel again this year.

Ryan Tan was in the 2nd WA team last year. He has been training hard and it will be interesting to see how he fares this year.

Jacky Zheng was also in the 2nd WA team last year. He has grown taller again from the last time I saw him.  His skills will have improved too like his height.

Aiden is the new boy to the state team. He is young and will have lots to prove. Good luck on his journey.

I seem to be missing a boy?

As for the girls, we have the Tan twins. Jasmine and Janice. They were also in WA's 2nd team last year. They will be a great asset to the team.

Berniece Teoh and Alicia Xu were also in the 2nd WA team last year. We will be expecting great games from them. Both are young but seasoned for their age.

Katrina Garing was in the 1st team last year and it will be good to see how she will help WA this year.

Anjali is the 6th girl. She was in the Under 15s team last year. This must be her 2nd state team. I have seen her training hard and it will be interesting to see how the girls rank against each other as they have not had to play for any selection to the team.

Likewise the boys have not had any selection games and it is unclear what their ranking will be within the team.

I must say I am glad that Teck Hin Tan have stepped in as the manager. He will have his work cut out for him. Good luck Teck Hin :) 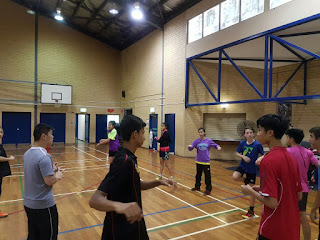 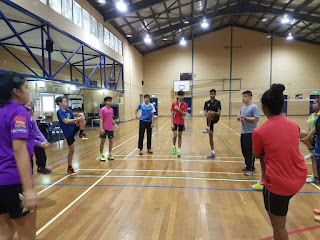 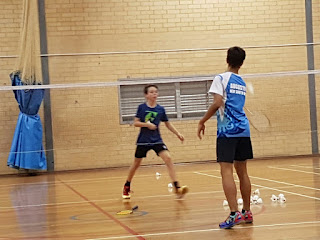 Time to go to sleep after a tiring night of badminton at Wesley.  Will keep everyone posted on the team's progress. Special mention needs to go to Irene Tan who provided the photos. Need more photos Irene.