The 3rd and final day of the tournament

The 3rd day did not bring much glory to the WA players other than Milain who progressed to the finals in the BD and MD.

He lost his singles to Edward Lau in 2 sets just reaching 10 pts showing the difference in their level. Edward progressed to win the title against J Feng in 2 low sets too.

Katrina could not progress further in the plate final. Alicia went to the finals of the plate but lost to Kelly Xu in 2 sets.

Milain and V He won the semis against M Kong and Z Fung but then met brick wall Edward and M Chan in a 3 sets finals that was so close that the final set was 22-20. It could have been any one's match.

Edward from NZ has tripled crowned just like K C Teoh last year. His parents must be so proud.

In the GD, Katrina's run with S Low ended after losing to Lily Rose and E Smith in 2 sets.

Well, that is the end of the tournament for all the players.

I am sure the players have learned much from this experience. Will they continue to play for WA? We wish them the best. The sacrifice from the players and the parents must be noted.

After the tournament, the players finally managed to get a relaxing day before flying safely back to Perth. 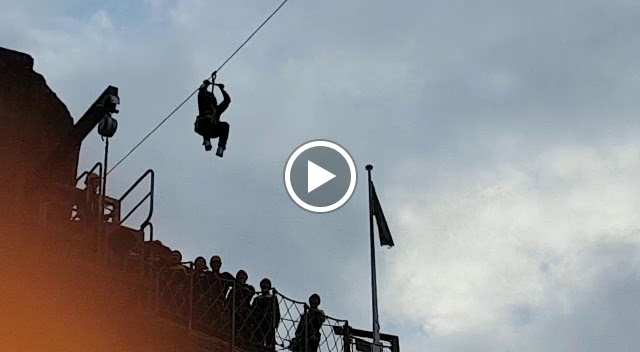 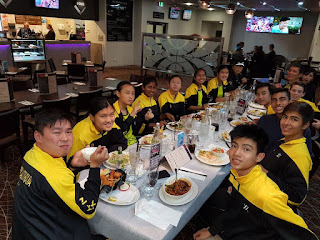 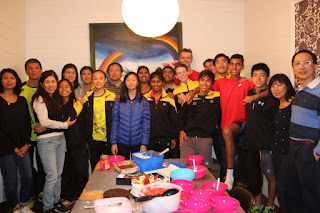 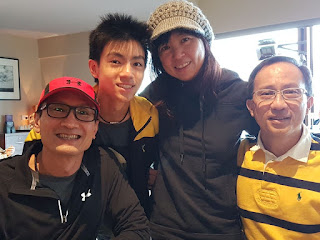 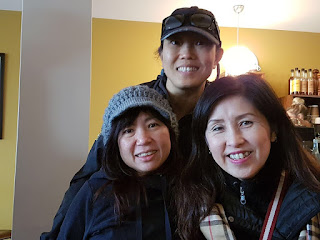 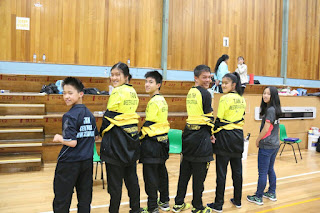 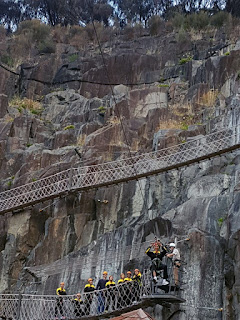 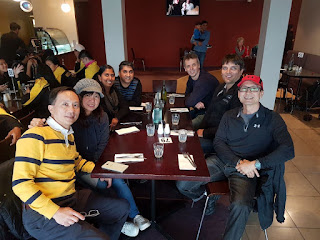 The 2nd day of individual events. Who is left standing?

It has been a tough day for the WA players. A few if them have been knocked out of their dreams. However, there are still several fighting on for personal glory.

Milain continues his run after beating J Young in 2 easy sets. However , he now faces 1st seed Edward Lau on Friday. We wish him the best.

Jackie Zheng was also not strong enough to fight 5th seed A Jeffrey losing in 2 sets. Jackie will have learned much and should be proud of  his achievement as he is till young.

Ryan's run also ended losing 2 sets to J Fang who is seeded no. 3. He has tried his best and I am sure his parents are proud of how he has played.

Aidan also could not stop top seed Venpin losing in 2 sets. Never, he is still young and will have learned from this experience.

Anjali met a brick wall against no. 1 seed Z Fung losing in 2 sets. Like Jackie, she still has time to get stronger next year.

Likewise Berniece lost in 3 sets to E Viravong. The 3rd set was so close at 22/20. She must have been in tears. There is nothing to fear as she is still so young. She is our rising star.

Janice gave her all but had to concede to No. 2 seed Amelia in 2 sets. Again, I think she has another year at Under 17s.

Meanwhile Alicia is progressing in the plate and may be in the semis tomorrow.

Katrina is also progressing well in the plate and it may be a WA WA plate final.

Romy and Katrina lost to No. 1 seed Venpin and N Kuhan in 3 very close sets. Again the last set was lost at 22/20. They must be devastated. However, they should also be proud of what they have achieved.

Ryan and Jasmine also could not progress losing in 2 sets to no. 2 seeds J Fang and S Li.

Milain and V He continue to progress beating E Chan and B Aniceto in 3 sets.They face 5th seeds R Audley and A Lowe tomorrow or is it today. Good luck.

Romy and Ryan are fighting all the way. They had a tough 3 sets against R Audley and R Venpin. They face Ryan Chan and E Chan today. This will be a good fight and we wish them all the best.Milain and M Kong are also in the next round beating D Han and D Hocking easily in 2 sets. They face J Donald and J Yin today. They should be able to progress further.

In the pate, Aidan and partner lost in 2 sets and are out of the tournament. Again, Aidan is very young and has a great future ahead of him.

Katrina and S Low have progressed to the quarters in 2 easy sets. They play 3rd seeds L Rose and E Smith of NZ tomorrow. They have their work cut out. Again good luck.

Amelia and Bernice lost to L Rose and E Smith in 2 sets.

Likewise Alicia and K Yang could not progress losing in 2 sets to B Aniceto and E Viravong.


For the players who have seen their tournament end , there is always the future to look forward to.

More training, more sacrifices in the name of badminton. As I said to the parents, better for us to see them in the badminton courts than the law courts.

Posted by Raymond Tan at 10:42 AM 3 comments: Links to this post

The first day of the individual events

The results so far have been mixed.

In the boys singles:

Milain has beaten Gavin Ong in a walkover and faces Jacob Young tomorrow.

Jackie beat MNZ Wen Kai Sim in 2 sets and progresses to the 3rd round. He  must be so pleased.

Romy beat SA M Sojan in 2 sets but had to bow out after meeting 5/8 seeded Evan Wong in 3 sets. Good fight Romy.

Aidan Wheller is also doing well beating QLD Kevin Guo in 3 sets. However he faces 2nd seed Ryan Venpin tomorrow. We wish him all the best. I am sure his dad will be giving him a good pep talk tonight.

In the girls singles:

Anjali is in the hunt. She beat MNZ K Hoyt in 2 easy sets. She continued her run winning in 2 sets against ACT's A Souksavat. She faces 1st seed ZecilyFung tomorrow. What a challenge. We wish her all the best.  Can she produce an upset?

Jasmine won her first set against QLD T A Vo after a close first set. However, her run ended after losing to 5th seeded Maggie Chen in 2 sets. Jasmine will continue to improve I am sure.

Alicia Xu went to the plate after losing to Angie Liu in 2 sets.

Berniece is fighting all the way. She beat CNZ's JY Tee in 2 easy sets. She had a 3 setter against Vic's Sabrina Chung after losing the first set. Her dad must be stoked. Lots of phone calls I am sure tonight between daughter and dad re tactics for tomorrow's match against E Viravong. Good luck Berniece, GO GO WA.

Katrina lost to M Almazan in 2 sets and progresses to the plate.

Janice is also on the hunt beating ACT's L Xing in 2 easy sets. She then beat QLD's K Boontaeng in 2 sets. She faces 2nd seeded Amelia Lowe tomorrow. We pray for Janice. Give us your personal best Janice. Mum and dad will be supporting you. I am sure you will bring tears to Dad's eyes again win or lose.

Romy and Kat are doing well. They beat a CNZ pair in 2 easy sets. Then they beat another NZ team in another easy 2 sets. However they face No. 1 seed Venpin andN Kuhanandha tomorrow. Can they cause another upset? Keep in tune.

Berniece and Julian withdrew from the match. No idea why.

Jackie and Janice beat a Tassie pair before losing to a 3rd seeded NZ pair.

Ryan and Jasmine also won their first match against a NZ team before losing to a 3rd seeded NZ pair.

Aidan and Anjali have progressed to the p;ate after losing to a NSW pair.

Milain pairing with Vic He of NSW are seeded 2 and have progressed to the 3rd stage. They face Ethan Chena and B Aniceto tomorrow.

Aidan paired up with D Lawrence and had a bye before losing to C Jong and M Kha in a cloely fought 3 setter.

Jackie paired with Julian but had to withdraw.

Romy and Ryan are doing well beating a CNZ team in 2 easy sets.

They had a tougher 3 set game against Vic's Audley and Venpin. Well done boys. Keep fighting tomorrow against R Chan and Ethan Chan.

Milain has partnered M Kong of Vic. They progress to the 3rd stage  easily as they are the 2nd seed.

Katrina is partnering NSW S Low. They are doing well progressing to the 3rd round after beating a MNZ team in 3 sets. They then beat a CNZ team in 2 easy sets. Tomorrow they face 3rd seed, Rose and Smith. Let's hope for the best.

Alicia partnered Vic's K Yang and lost to B Aniceto and E Viravong. They go to the plate.

Jasmine and Janice had an easy win against their opponent in the first stage but lost to 2nd seeded M Chan and Vic He in 2 sets.

We wish all the players good luck today as it is 2 am now.


Posted by Raymond Tan at 10:37 AM No comments: Links to this post

The final day of the team event

We have reached the final day of the team events. Although the players have given their all for the State, they are only playing for 5/6 positions.  They play against SA again. This time, they beat SA 11/5. There were a few 3 setters. Looking at the scores, you will not be able to see the joys and tribulations experienced by the players as they fought for WA.

We are so proud of all these young players putting their hearts put for WA. WA was placed 5th in a field of 10 teams.

They now have to look forward to the individual events.

Good luck to all of the players. Personal bests and personal glories are still out there to be achieved.