The morning started with breakfast of curry puffs prepared by Auntie Ee. She has been sending curry puffs to my home every Sat for nearly a year. God bless her.

The boys had already woken up earlier and had Shanghai dumplings and sausages.

We arrived at Armadale exactly at 10 am. I hate the drive to Armadale as it is so far from home.

Most of the players had just arrived too.

The first tournament style match will start at 12 pm. There is lots of time to warm the players up.

Annie, Irma and Sok Teoh were given the task of preparing lunch which was chicken rolls.

This is the first time the team has had a lunch together as a team. They will be sharing lots more meals together which will make the team bonding even better.

The 3 new state players were interviewed. Their interview will be posted soon.

I am trying out posting the videos onto You Tube as suggested by Sok Teoh. previously, whenever I post a video on the blog, it had to be quite short. Hence the break in the videos. This new method seems to be working better as posts to Youtube can be up to 30 mins of video. Wish I found this out earlier. Thanks Teoh. 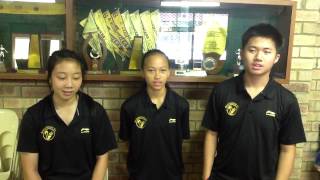 You will note how shy they seem. I bet you when they return , they will be full of confidence having represented their state. I  know from experience. Just listen to Olivia and Xiang now after playing in 2 state teams.

The players had their first team cheer together.

The team commence the day's tournament with a match against the Coaches Combined team.


The first game will be Tyz and Alex v Daryl and Angie.

Teoh is playing with Serena against Edmund and Rita from Italy.

Tyz is playing Daryl and is at 10 all after trailing.

Edward is playing Edmund in another singles set in place of Amos. Edward is leading at 9/8. Edward gets to 11/9 first.

Serena is leading by a small margin of 14/13 against Sarah. She gets another point and shows how much she has improved since playing and training at state level. Sarah gets 2 points to get to 16/18.

Sarah gets to game point and Serena gets to deuce. Serena wins the game to her relief.


Tyz and Titus win against Daryl and Gavin 21/18 and also 22/20. Their partnership is getting stronger.

There was a short break for a photo op with all the players.

That means the State team has won the first team challenge. Good on them. That should give them good  confidence for the President's Cup.

The team is now warming down before they have a team talk and a discussion on the badminton rules.