Afternoon of the first day

The afternoon was tough.

The afternoon game did not go well in the start. Jaz and Tyz could not beat Guda and Sha losing 21-13 and 21-17. They just could not warm up fast enough..

Amos and Edmund are fighting hard against Austin and Howard. Lost 21-16 but are trying hard. They lost  the 2nd 21-14.

Titus is playing against his arch rival Huai Dong Tang.  They have played against each other for 3 years.  Huai got to 11-9. He fought very hard but had to contend with losing 18-21.

Jaz got to 24-22 against Howard after some dodgy lining by NSW. He has so much spirit.  The 2nd set was another nail biter.  Jaz went all the way to finish at 21-13. I am so proud of how he fought.

YuLi came to me and asked me what was the difference between  Jazton’s usual game.  She said the reason was that he never smiled.YuLi  told me that she had told him not to smile and he will win.

The next game is between Austin Yu and Edmund. Austin is the current Under 15 champ. He got Edmund 21-10 on the first set. The 2nd game was a closer call with each player going point for point.  Justin started edging away till it was 20-15. Justin got the game at 21-15.

Amos is playing Guda who was ranked 1 in the Under 15s 2 years ago Amos is more focused for this game but is still trailing. He went down 21-12.   Amos is not doing better on the 2nd set.

The mixed doubles started with Tyz and Shelby. They were leading in the first set until they reached 19 before losing their concentration. On the 2nd set, it was again a struggle. They were down 15-18 but continued to fight. The opponent got to 20 and I thought that was the end of the game. Shelby then proceeded to serve 6  good serves with Tyz smashing the return. They managed to win the 2nd set to everyone's amazement at 22-20. The 3rd set was a better game and they finishedat 21-11 having broken the opponent's spirit.

Although the WA team lost, they played their best and never gave up. That is all we ask of them. To give their best. 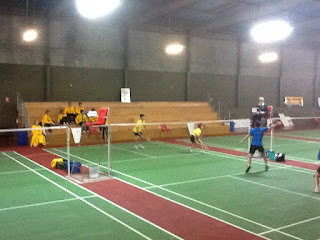